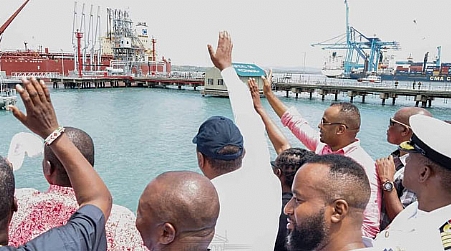 Kenya exported from the coastal city of Mombasa its crude oil at first time on Monday 26 of Aug. the 200.000 barrel of crude oil is extracted from Turkana oil fields and loaded to Malaysia with USD12 million of revenue received by the government of Kenya. In his inauguration speech president Uhuru Kenyatta said, “The first export of crude oil by our nation, therefore marks, a special moment in our history as a people and as a country”. The first attempts to discover oil in Kenya goes back to 1930s but only in 2012, commercially viable oil deposit was discovered. In June 2018, Tullow started to export 2000 barrels of oil per day as a pilot from Turkana to Mombasa. The estimated oil deposits in Turkana oil fields is 560 million barrels and according to Tullow Oil 100,000 barrels could be exported per day from 2022, this will mark Kenya’s entery to the oil exporting nations. The company announced that with other partners they invested $2 billion in Kenya in oil extraction. Notably, Kenya is the first country from the East Africa which exports its oil.

In March, president Kenyatta signed into law the petroleum act 2019. The long-waited bill regulates, oil exploration and how the revenue will be shared by the local communities, central government and the mining companies. The bill allocates 20% of the revenue to the local counts, 5% to the local community and 75% will be transferred to the central government. also, it stipulates that parliament will check the percentage in every 10 years. The division of the revenue haven’t solved the local communities’ resentment and their fear of not getting faire share from the millions of dollars expected to inflow in the next coming years. This fear of missing their revenue rights could be understood from the speech of Turkana county deputy governor Peter Emuria as he said, “When you slaughter a goat, the owner of the goat is left with the leg, Turkana County Turkana want their leg”.

Before the maiden shipment, there was a criticism on the secrecy surrounded Kenya’s oil exportation. Looking around and seeing how the natural resource is badly managed in Africa, in such away the wealth ended up in the pockets of very few people and greedy multi-national companies, the majority of Kenyans have a real skepticism towards whether the oil revenue will fetch prosperity or curse.

Latest maindent oil shipment coincides with the ongoing despute between Kenya and Somalia over the owner ship of 100,000km2 of sea thougth to contain huge amounts of hydrocarbons. And other round of hearing which will start on septemeber 9 and run through to septemper 13. The oil descovery and the unsettled despute between the nations in the east africa could rise economic and geopolitical struggle, and that worsens the unstable situation in the region.