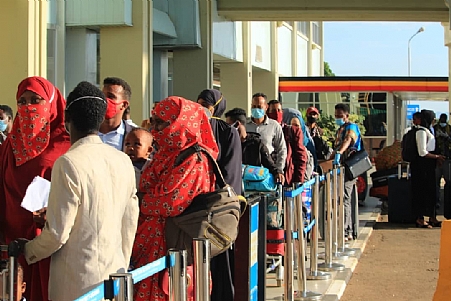 The Somali embassy in Uganda facilitated for the Somali citizens who were stranded in Uganda to come back to Somalia. The repatriated people were affected by the measures taken by the government of Uganda like stopping international flights to halt the spread of the virus. Most of the 84 citizens repatriated from Uganda were students, they will be flown to different cities in the country after their initial flight to Mogadishu.  Before dispatching them from Uganda, according to the Somali embassy, the citizens have undergone the required COVID-19 tests. Bringing back these Somali citizens is a part of a broader effort by the federal government of Somalia to help Somalis who stranded in abroad amid COVID-19.

The acting ambassador in Uganda Mr. Ali Mohamed Mohamud “Cagabaruur” and his colleague staff from the embassy were present in the Airport for the farewell of the people going back to Somalia. The acting ambassador underlined that, they embarked this operation in responding to the request of the Somali people. He stressed the intention of the Somali embassy in Uganda to continue the facilitation services for the Somali citizens who have the intention to go back to Somalia.

In coordinating with the foreign ministry of the federal government of Somalia, such commendable repatriation facilities are required from all Somali embassies in the world, thus this will boost the prestige of the embassies and strengthens the confidence between the citizens and their embassies.