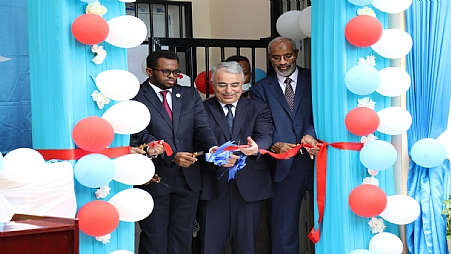 This event was attended by high delegates from both Somali government and Turkish authorities such as Mr. Mohamed Adan Moallim, Somalia’s Minister of Housing and Urbanization, Turkish Ambassador to Somalia Mr. Mehmet Yilmaz, TIKA’s Somali Coordinator Mr. Galip Yilmaz, Director of Higher Education Affairs for Somalia’s Ministry of Education, Culture and Higher Education and Mogadishu University’s former rector and member of the Board Professor Ali Sheikh Ahmed who is the current General Director of East Africa Association for Research and Development based in Istanbul. Also, Mogadishu University’s Vice President of Relations and International Cooperation, Vice President of Administration and Finance, members of the faculty of Engineering, Top Management of Maarif Foundation, Turkish Diyanet Foundation, Recep Tayyip Erdogan Hospital and other notable individuals from the education sector was present in the event.

The laboratories which can conduct tests in five key areas: water, soil, asphalt, concrete, and iron is composed of state of art testing machines brought directly from Turkey. The technologies in these labs represent first of kind in Mogadishu and in Somalia in general and will cover the dire needs for testing construction materials. This testing center will save cost and time for construction companies which were forced to send samples of construction materials abroad for testing.

The Turkish Ambassador highlighted that Turkish involvement in Somalia is moving from traditional humanitarian assistant to a full-fledged development partnership which the opening of these labs are its beneficial fruits. Also, Somalia Minister of Housing and Urbanization emphasized that Minister’s Quality Control Unit will develop a close relation and partnership with Mogadishu University’s labs in order to increase the safety and quality of construction materials used in the country.

Mr. Galip Yilmaz, TIKA’s Somalia Coordinator, has shown his pleasure to witness this historic event and underscored the importance of such testing center for students of engineering of Mogadishu University and other schools. This launch event was concluded with a tour of the testing facilities and top management of the university has show their gratitude to Turkish government and its people for their self-less support and declared that the bilateral relations between Turkey and Somalia will prosper for hundreds of years.