Director General met a senior advisor to the Republic of Turkey 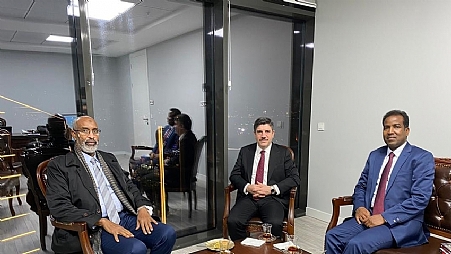 Director General of East Africa Association for Research and Development (DAD) Prof.Dr. Ali Sheikh Ahmed have met Prof.Dr. Yasin AKTAY a senior advisor to the president of the Republic of Turkey Recep Tayyip Erdogan in Ankara. During the meeting issues related to Somalia and Turkey were discussed and view on the best ways to bolster the relations between the two brotherly countries have been exchanged.The Director General extended to Yasin AKTAY his appreciation and gratitude to the government and the people of Turkey for the constructive role Turkey has been playing in Somalia in the last ten years. In his side, Yasin AKTAY revealed his pleasure towards the tremendous achievements in the last ten years in education, trade, healthy and state building. Mr. AKTAY asserted the importance of civil society and businesses in promoting the relations between the two countries.

Turkey has been an outstanding supporter of Somalia since 2011 when president Recep Tayyip Erdogan then prime minister paid a historical visit to Somalia. Since then, Turkey’s humanitarian and developmental agencies has been operating in Somalia by undertaking humanitarian and developmental projects like rehabilitation of roads, airports and building mega healthy facilities. Besides that, thousands of Somali students were given scholarships by the Republic of Turkey. Notably, Turkey has its largest embassy building in Mogadishu, a sign of the strong ties between the two countries.