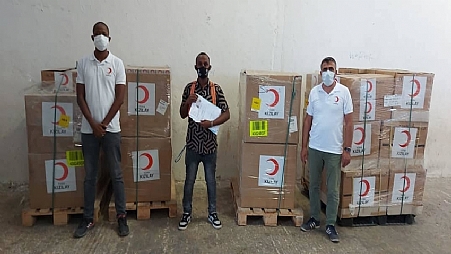 The Turkish Red Crescent has donated 10 ventilators to the Somali Health Ministry, the Turkish embassy in the capital Mogadishu said on Friday. “The machines that have been handed over to the Somali authorities will be used in intensive care units and contribute to the fight against COVID-19,” the embassy said in a statement.
This aid came after the beginning of the second wave of the pandemic which claimed the lives of more people mainly in the capital city of Mogadishu and Earlier this week, it was reported that Mogadishu hospitals have run out of oxygen. Dr. Abdirizak Yusuf Ahmed, a Health Ministry official, told Anadolu Agency that the ventilators will help the country fight against COVID-19. He thanked the Turkish government for its support in the fight against the pandemic.
Somalia on Thursday recorded five new deaths and 128 more COVID-19 infections, according to the country`s Health Ministry. The Horn of Africa country has so far recorded 6,687 confirmed coronavirus cases, with 3,784 recoveries and 223 deaths.
Since the outbreak of the pandemic Turkey handed over medical aid to the Somali government which contributed the alleviation of the severity of the disease.
Share Post: